7 Lessons Learned on How to Thrive in the Cancer Journey

Do you have someone in your life that models strength and optimism?

Do you know anyone that has risen above adversity and came out smiling and laughing?

Do you know someone diagnosed with cancer three times who still does not define their life around cancer?

My mother Amelia is that person to me. She was diagnosed with three cancers in a little over 5 years. In those years, I witnessed the grace and grit that helped her to cope, connect with her family deeply, and feel in control during uncertain times. She is a three-time cancer survivor. She is the healthiest and happiest person I know – even though she had cancer.

The Healthiest and Happiest Person I know

My mother always valued health and happiness and made living a healthy and happy life, a personal mission. It was a hobby of hers to seek ways to maintain and sustain health and wellness in her family. She was always on her feet moving about and laughing at herself doing something silly or laughing at my father’s funny jokes and stories. She took the subway to work and was on her feet all day long working in a pharmacy until she retired at the age of 75. My parents’ basement resembled a YMCA gym with weights, stationary bikes, treadmills, and the latest Total Gym. I remember growing up hearing her take exaggerated deep breaths as she stretched and marched back and forth in front of the television in our living room while watching Richard Simmons or some other exercise gurus. 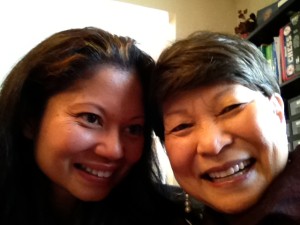 My mother who always made healthy choices and did not have a family history of cancer was diagnosed with 3 different cancers (breast, endometrial, and lung) over the course of 7 years. She did not define her life with cancer. She defined her life with friends and with family.

In 2008 at the young age of 70, my mother was diagnosed with breast cancer. This loaded diagnosis was the very first time my family and I had to deal with cancer directly. As a nurse at Tufts Medical Center in Boston for over 25 years, I’ve taken care of many patients after having lumpectomies, mastectomy, and breast reconstructive surgeries. It was a part of my job. However, being a nurse and knowing all of this didn’t help me when my own mother was diagnosed with breast cancer. The tables had turned and all of sudden I’m on the other side of the hospital bed comforting and supporting my mother—the healthiest and happiest person I know!

One of the things that amazed me during that time was how quickly she accepted her diagnosis. She thanked God for its early detection. She trusted her whole medical team and decided right away to do what needed to be done to take care of her cancer. While she waited for her surgical date, she went to work every day,  prayed, and went to church. She would talk with me and my sisters about her will and proxy. She would read books and articles about what she had and natural cures that she could take along with her medical regiment. She’d spend time with my father by going shopping or going to the movies. By the time her surgery came around, she was ready and prepared. Her breast cancer was taken care of with a lumpectomy and hormonal medication. She only took a few weeks off from work and then went back work at the pharmacy. What I witnessed in her during this whole episode was how she kept a positive outlook through prayer and being proactive with her health, both of which, she was able to control. This made her feel so much better.

In 2013, after she turned 75 years old, we had a double celebration. We celebrated her birthday and being breast cancer free for 5 years! This short lived joyous occasion came to a halt when two unrelated cancers (endometrial and lung) were found during a somewhat routine medical appointment. My mother revealed to her primary doctor that she had been having bleeding and didn’t understand why. After many examinations and testing, our worst suspicion was confirmed. She had cancer again! Needless to say that whole summer was busy with tests, biopsies, and surgeries. My mother, the healthiest and happiest person I know, had two major surgeries that summer. Little did we all know that what was ahead would be the toughest part of her cancer journey.

The fall of 2013, although it was part of her endometrial and lung cancer journey, deserved its own chapter in this story. This was a time that truly tested what she was made of. My mother, the healthiest and happiest person I know, was weak from her chemotherapy, her medications, and a lack of sleep due to excruciating bone pain resulting from the effects of her chemotherapy.

Regardless of her suffering when I would ask her how she was doing, I would hear her say, “Dun’t worree dahling. I will be okay.”

My mother, a woman with great poise and pride, had to rely on my father to help her move back and forth to the bathroom, to give her massages in the middle of the night to sooth her itching and her bone pain. Further, it was during this time that she could no longer hide her cancer from the rest of the world as her hair was falling out. She was so convinced that her thick and coarse hair was not going to fall out during her treatments that when it did start to, her faith in God and her trust in her ability to heal would be tested to the max. It frustrated her when she would lay down and clumps from her beautifully thick hair would be left on her pillow case, when she would shower, handfuls would rinse off with the water, and when she would eat, she would notice it falling off onto the plate right in front of her eyes. Although my mother was the one dealing with the cancer and the all the “pain” that came along with it, I still looked to her for strength.

I started to get nervous and scared when I saw her looking so weak and tired. I had never seen her so frail and solemn. I recall the phone call when she asked me to come over to her house to shave her head.  She had finally accepted losing her hair.  She wanted to do on her own terms. In the car, outside my parents’ house I had to take five minutes to compose myself. I knew how difficult this was for her. I was so scared but I couldn’t show it! I had to be strong for both my parents. When I got into my parents house, my mother was all prepared. She laid out newspapers on the floor and placed a chair right in the center. There was little conversation, we had a job to do and it needed to be done. She chose an area in her upstairs hallway for me to shave her hair off. It reminded me of when I used help her color her hair but this time, it was different. Surprising, shaving her head was not as difficult as I thought. When I finally got into the rhythm of it, I started to see little scars on her head here and there.

“Mom, what are these scars from?” I asked

“Oh, I was accident prone when I was a little girl and I kept bumping into things.” She said with a smile and a little giggle.

As if each scar was a timeline button, she would press one and tell me when and how she got it. We laughed and laughed after each recollection. The images of my mother getting into mischief and hurting herself while playing with other children made for such a comedy relief. It made this heavy situation lighter.

I’m happy to say my mother’s hair has fully grown back and she’s enjoyed over a dozen different hair styles and colors since. More recently, she just recovered from a knee replacement surgery. The knee was causing her a lot of pain and it was slowing her down when she would walk along the beach, clean the house or work in her yard. Her doctors, nurses, and physical therapist are all amazed at how well she has done. 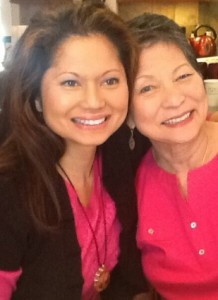 Positive psychologists would describe my mother as someone who used her faith, relationships, bravery, love, and innate strengths to become more resilient and to thrive during adversity.

What does Positive Psychology, the science of happiness, have to do with Cancer? I say, “Everything!” The more we can learn from people who have risen above adversities, the more we can cultivate similar practice to make us even better, stronger, and happier.

Some might say it’s coincidental, but I like to think of it as divine timing that Positive Psychology came into my life and when I needed it most. I completed my certification in Positive Psychology with Tal Ben-Shahar, Ph. D through the Wholebeing Institute and, soon after, received my training and certification as a Positive Psychology coach after studying with another leading expert in the field, Robert Biswas-Diener, Ph. D. Positive Psychology gave me the knowledge and perspective for looking at the glass as “half-full”. I put the principles of this science to the test personally as I needed a way of cope with my mother’s disease. I found that it kept me from ruminating, spiraling-downward mentality and feeling like a victim.

7 Lessons Learned to Thrive in the Cancer Journey

I learned so much about my mother and myself during the last few years. While some lessons where easier than others, I am certainly a much healthier and happier person because of them. Here are 7 lessons that I learned from my mother, the healthiest and happiest person I know, who defeated three cancers.

Trust that applying any of these lessons will help you during your cancer journey. Here’s to your health and happiness.

This site uses Akismet to reduce spam. Learn how your comment data is processed.