An Overlooked Fall Prevention Tip for the Aging Adults

An Overlooked Fall Prevention Tip for the Aging Adults

Author of The Happiness Result 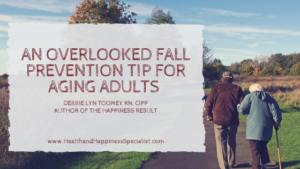 Do you remember the last time you fell and got up quickly?

While most people instinctively get up as soon as they fall, seniors are not so fortunate. Many aging people have a difficult time getting up after they have fallen because they are too weak or they’ve injured themselves.

Falls are the leading cause of nonfatal and fatal unintentional injuries by people age 65 and up (CDC, 2016). According to the Center for Disease Control and Prevention there were 27,000 seniors that died as the result of falling in 2014. Further, 1 in 4 elderly report that they have fallen. This number is staggering!

Our body is always changing. The population that is impacted the most are the elderly. As we age, we unfortunately get slower, more frail, and weaker making it more and more difficult “to do the things that we used to do.” For these reasons and many others, it’s no wonder that the elderly develop a fear of falling.

While the physical factors that I just mentioned may contribute to a senior’s fear of falling, there is also a mental factor. The belief that falling is inevitable. This powerful fear also contributes to falling. The more someone is afraid of falling, the less they want to move around. The less active they are, the more deconditioned they become. The weaker they are, the higher likelihood is that they will fall. In other words, the fear of falling becomes a self-fulfilling prophecy!

My 83-year-old father got into the habit of walking with a cane. It happened as a result of needing an easy-to-use device to help him move around due to swelling of his legs. Soon enough, he became dependent on the cane and lost his confidence in walking without it. Even though, the swelling stopped and his leg condition improved, he still held on to that cane for fear that he might fall without it.

During one of his doctor visits, I suggested that he ask his physician for a physical therapy consult so that he could strengthen his body and build endurance. After weeks of exercises with his physical therapist, my dad became stronger and steadier. He’s become more active and more confident about his ability to move around by himself without a cane. It worked!

What’s a physical therapist? It’s a highly trained licensed health care professional whose job it is to “help patients reduce pain and improve or restore mobility”, according to the American Physical Therapy Association. Depending on your needs, a physical therapist may be able to work with you to a point that you may be able to reduce your pain medication needs or even avoid surgery all together.

There are several fall prevention tips that are useful and practical. However, the one that is not often used is requesting one’s doctor for a physical therapy consult. I believe it’s an overlooked and underutilized specialty for prevention because it is usually associated with rehabilitation. It’s worth noting that physical therapy has an important place in fall prevention. It’s not to say that aging adults should not join a gym or an exercise group. Of course, they should. As long as they have the consent of their doctor.

If you know a senior who is afraid of falling, one of the best tips is to inform that person that he or she can ask their primary care physician for physical therapy. This request will notify their doctor of their concern and will make it a part of their routine evaluation every visit. If physical therapy is not indicated, then ask for information on an exercise program that can improve their condition.

The first day of the Fall season has been named Falls Prevention Day. This year, it is September 22, 2018 in order to bring increased awareness and education to the seriousness of falls for the aging population. To find out more about resources for the elderly, contact your local Council on Aging.

It’s good to note that while the elderly do fall, it doesn’t have to be a part of aging. There are many ways to prevent it from happening.

It’s never too late to set goals for yourself, no matter how old you are. If you need professional coaching on how to live a healthy and happy life, contact me at info@HealthandHappinessSpecialist.com.